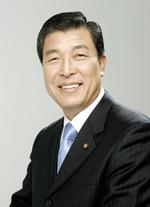 
The Honourable Jin Ha Hwang (Ret. Lieutenant General), ICAS Fellow, is a second-term member of the National Assembly of the Republic of Korea, representing Paju City in Gyeonggi Province. Assemblyman Hwang is currently serving Foreign Affairs, Trade, and Unification Committee and also as Vice Chairman of Intelligence Committee. With Grand National Party, a ruling party, he is in charge of coordinating national policies with government in the fields of foreign affairs, national security, unification, and intelligence. Prior to joining the National Assembly in 2004, he had served in the Republic of Korea Army for 39 years; his major positions including Force Commander of the United Nations Peacekeeping Force in Cyprus (UNFICYP) from 2002 to 2003, Defense Attachť in Korean Embassy in the United States from 1998 to 2001, and many others. Jin Ha is currently a Ph.D candidate in political science in Kyungnam University, Seoul. He holds M.A. in Public Administration from Central Michigan University and is a graduate of the Korea Military Academy (the 25th Class in 1969). He resides in his district with his wife Bokyung, and they have two sons and a daughter.