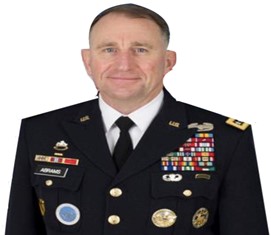 An Armored Cavalryman, Abe earned his commission from the United States Military Academy in 1982. Following the Armor officer basic course, he spent his formative years in a Division Cavalry Squadron with a mission on the East-West German border. Gen Abrams has commanded at every level from Company through Division, and led units in combat operations in Saudi Arabia, Kuwait, Iraq and Afghanistan. Abe has extensive combined arms and joint experience.

His joint experience includes serving as a strategic war planner for the Chairman, Joint Chiefs of Staff and as the Director of the Joint Center of Excellence for Improvised Explosive Device Defeat. Gen Abrams also served as the Senior Military Assistant to the 24th Secretary of Defense.

Gen Abrams holds a Bachelor of Science from the United States Military Academy, a Master of Science from Central Michigan University, a Master of Strategic Studies from the United States Army War College, and has attended a wide variety of military schools. Happily married, Abe and his wife are proud parents of two children and grandparents to two grandchildren. He is a functional fitness enthusiast who also enjoys golf, follows college basketball closely, and gets March Madness annually. Abe remains an ever-optimistic fan of the Army football team.