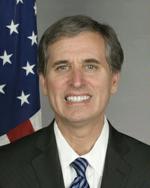 Scott Busby currently serves as Principal Deputy Assistant Secretary in the Bureau of Democracy, Human Rights and Labor at the U.S. Department of State in Washington, DC, where he oversees the Bureau's work in East Asia and the Pacific as well as on multilateral and global issues, including LGBT rights, Internet freedom, and business and human rights.

Previously, Scott served as Director for Human Rights on the National Security Staff in the White House from 2009 to 2011 where he managed a range of human rights and refugee issues. From 2005 to 2009, Scott was Coordinator of the Intergovernmental Consultations on Migration, Asylum and Refugees in Geneva, Switzerland.

Prior positions include Director of the Office of Policy and Resource Planning at the Bureau of Population, Refugees and Migration in the Department of State, Director for Multilateral and Humanitarian Affairs at the National Security Council under President Clinton, and counsel at the Office of the United Nations High Commissioner for Refugees (UNHCR) and at the Immigration and Naturalization Service (INS).

Scott holds advanced degrees in sociology and law from the University of California at Berkeley and received his B.A. from Amherst College.