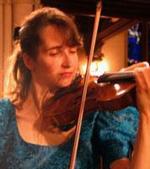 
Judy Cho is a versatile performer who pursued Doctoral studies in Performance at the Graduate School and University Center of the City of New York. Her major teachers were Itzhak Perlman and Juilliard Professor Masao Kawasaki. Abroad, Judy was invited to perform solos and recitals in France, Germany and China. She performed in chamber ensembles and orchestras throughout Israel and Jordan. In America, Judy performed in concerts in most major New York concert halls in Lincoln Center and Carnegie Hall. She joined the US Army Strings, "Pershing's Own" in June, 2007. Since moving to the Washington , DC area, Judy has performed at the Vice President’s residence, the Capitol and the Austrian, Czech, and German Embassies.