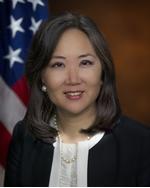 
A. Marisa Chun, ICAS Fellow and Liberty Awardee, serves as Deputy Associate Attorney General at the U.S. Department of Justice. Her responsibilities include a range of the Department’s civil and criminal law enforcement issues, including intellectual property rights, antitrust, and telecommunications issues. Marisa also serves as a Special Assistant United States Attorney at the U.S. Attorney’s Office for the Eastern District of Virginia, where she prosecutes narcotics, firearms, gang-related sex trafficking, immigration, and other crimes. Previously, she was a litigation partner at Coblentz, Patch, Duffy & Bass, LLP in San Francisco, a Senior Trial Attorney at the U.S. Department of Justice, a Court-appointed mediator for the U.S. District Court (N.D. Cal.), and a law clerk on the U.S. Court of Appeals for the Ninth Circuit. Marisa has served as Chair of the State Bar of California’s Federal Courts Committee and Chair of the Bar Association of San Francisco’s Litigation Section. She was the recipient of the U.S. Department of Justice’s 2010 John Marshall Award for Providing Legal Advice and the National Asian Pacific American Bar Association’s "Best Under 40" Award. Marisa is a graduate of Yale University, summa cum laude, and Harvard Law School, cum laude, where she served as Developments Editor of the Harvard Law Review.