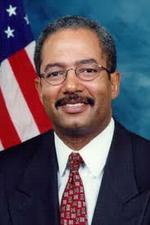 Congressman Chaka Fattah (United States Representative: D-2nd-PA) is Senior Member of the House Appropriations Committee. This committee is responsible for setting spending priorities of over $1 trillion in annual discretionary funds. Chaka is Ranking Member on the Subcommittee on Commerce, Justice, Science and related agencies (CJS). The Subcommittee on CJS oversees close to $70 billion in discretionary spending. He also sits on the Energy and Water Development Subcommittee. Chaka is Co-Chair of the Congressional Urban Caucus a bipartisan group of 57 Members representing America's metropolitan centers. These Members work collaboratively with other stakeholders to address the unique challenges facing America's urban communities.

In May of 1986, Chaka earned a Master’s degree in Governmental Administration from the University of Pennsylvania, Fels Center of Government.

He is the recipient of numerous honors and awards including 10 honorary doctorates and the University of Pennsylvania’s Fel’s Center of Government Distinguished Alumni Achievement Award. Time Magazine named Chaka one of the 50 most promising leaders in the country.

In 1984 Chaka attended Harvard University’s John F. Kennedy School of Government where he received a certificate in the Program for Senior Executives in State and Local Government.

Chaka is married to Renee’ Chenault-Fattah and they have four children. Mrs. Fattah is a lawyer and TV News Anchor. He and his family are long-time members of the Mt. Carmel Baptist Church in Philadelphia, PA. An avid golfer, Chaka is also a bike enthusiast.