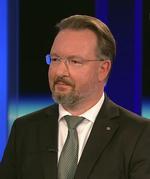 R³diger Frank. ICAS Fellow, is Professor of East Asian Economy and Society, and Head of the Department of East Asian Studies at the University of Vienna. He holds an M.A. in Korean Studies, Economics and International Relations and a Ph.D. in Economics. In 1991/1992, Ruediger spent one semester as a language student at Kim Il Sung University in Pyongyang and has been researching North Korea ever since. His visiting positions included Columbia University in New York, Korea University in Seoul and Seoul National University. Ruediger's major research fields are socialist transformation in East Asia (with a focus on North Korea), state-business relations in East Asia, and regional integration in East Asia.

Professor Frank is regularly consulted by governments, media and businesses on North Korea and East Asia. Since June 2011, Ruediger has been working with the World Economic Forum. In September 2013, the leading German newspaper Frankfurter Allgemeine Zeitung included him in its list of the 50 most influential German economists.