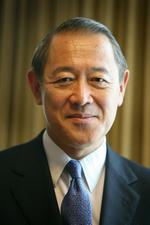 Ambassador Fujisaki served as the political minister of the Embassy of Japan in Washington, DC, from 1995-99. His association with the United States goes back even further. It started with a year in the early 1960’s as a junior high school student in Seattle, Washington. He also studied one year each at Brown University and Stanford University Graduate School in the early 1970’s.

As a diplomat, the Ambassador has also served in Jakarta, Paris (OECD), and London. Prior to his current post, he served as Ambassador to the UN and to the WTO in Geneva. While there, the Ambassador served as the Chairman of the Executive Committee of UNHCR (UN High Commissioner for Refugees).

His wife Yoriko attended kindergarten at Ben Murch in Washington, DC. Their two daughters also attended school in the Washington area. The elder daughter Mari graduated from Stone Ridge High School in Bethesda, MD. The younger daughter Emi studied at the same school as well as at Somerset Elementary School in Montgomery County, MD. Both daughters now work as journalists in Japan.

Ambassador Fujisaki was a research associate at IISS (International Institute for Strategic Studies) in London from 1987-88. He taught as a lecturer of International Relations at Sophia University in Tokyo from 1991-95. Since his arrival in Washington, the Ambassador has spoken at Brigham Young University, Columbia, Georgetown, Harvard, SAIS, Saint Joseph’s University, Stanford, and Yale as well as at several think-tanks in Washington, DC, such as AEI, Brookings Institution, CSIS, Carnegie Endowment, and Stimson Center. He speaks English and French fluently.