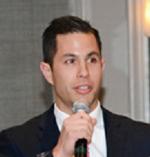 
Coming on board upon Senator Toomey’s election to the U.S. Senate in 2010, Christopher Gahan currently serves as the Senator’s Chief of Staff and closest advisor. In 2011, he led the rollout of the Senator’s Washington, DC office as well as his seven state offices across Pennsylvania. Chris manages all of the Senator’s official operations, including a team of over 50 staffers and an annual budget of over $3.7 million.

In addition to his service in the U.S. Senate, he practiced law in Los Angeles, CA and Washington, DC as an associate at Latham & Watkins, LLP, one of the largest law firms in the world. At Latham & Watkins, Chris specialized in health care, government relations, and corporate law, including publishing an article about Medicare reimbursement policy in the American Bar Association’s Health Lawyer magazine.

A native of Rye Beach, New Hampshire, Chris received his bachelor’s degree in biology from Brown University and his law degree from Harvard Law School. At Harvard, he was an editor of the Harvard Journal on Legislation. Chris is presently a member of the State Bar of California and the District of Columbia Bar.