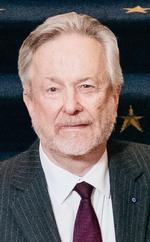 
Daniel J. Gallington, ICAS Fellow, is Adjunct Professor of Law at the University of Illinois College of Law in Champaign-Urbana, Illinois, where he teaches National Security Law. Dan served for more than twenty years in a series of senior national security policy and legal positions: As Special Assistant for Policy to Secretary of Defense Donald Rumsfeld, he performed the entire spectrum of duties of the Under Secretary of Defense for Policy and later performed the entire spectrum of duties of the Assistant Secretary of Defense for Special Operations and Low Intensity Conflict. He also served as Deputy Assistant Secretary of Defense for Territorial Security, as General Counsel to the United States Senate Select Committee on Intelligence and as Deputy Counsel for Intelligence Policy at the Department of Justice. Dan served four years in Geneva as a Member of the United States Delegation to the Nuclear and Space Talks with the former Soviet Union. A former Air Force Judge Advocate and Political Military Affairs Officer, he served active duty tours in Europe, Asia, the Pacific and with the Strategic Air Command. Dan received his BS from the University of Illinois, his JD from the University of Illinois College of Law and his LLM in International Law from the University of Michigan Law School.