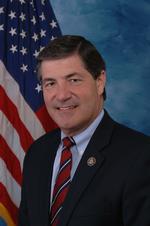 Rep Jim Gerlach (United States Representative: R-6th-PA) is a lifelong Pennsylvania resident and he grew up in Ellwood City - a small town in western Pennsylvania about an hour north of Pittsburgh. He currently lives in Chester Springs with his wife Karen. They have six children.

Jim's distinguished career in public service representing the citizens of Southeastern Pennsylvania began in 1990 with the first of two terms in the Pennsylvania House of Representatives, which was followed by two terms in the state Senate. During his 12 years in the state legislature, he established himself as an effective advocate for Pennsylvania taxpayers. Jim's efforts helped promote efficiency and streamline government, which saved taxpayers hundreds of millions of dollars. He was, in fact, the prime sponsor of landmark welfare reform legislation that reduced the state's welfare rolls by over 150,000 cases.

Jim is serving his fifth term in the U.S. House of Representatives, representing portions of Berks, Chester, Montgomery and Lehigh counties. In December 2010, he earned a spot on the influential House Ways and Means Committee. Jim serves on the Ways and Means Subcommittees on Health and Select Revenue.

One of his biggest legislative accomplishments was creating a much-needed veterans cemetery here in Southeastern Pennsylvania. The bill Jim authored was signed into law by the President on Veterans Day in 2003, and the cemetery opened in Bucks County in 2009.

National publications, including National Journal and Roll Call, have recognized Jim’s strong record as an independent voice for his constituents. And no member of Congress has had to fight closer contests each election cycle. The 6th District was ranked as the most competitive district in the nation between 2002 and 2008, according to a University of Minnesota survey.