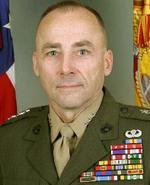 General Gregson is a 1968 graduate of the U.S. Naval Academy.

Supporting establishment duties included S-4 of a recruit training battalion, aide-de-camp, recruit training company commander, recruiting station executive officer, company commander of a combined platoon leader's class, and operations officer for a recruiting district. Marine Corps Headquarters duties included program development officer, coordinator for roles and missions, and Assistant Deputy Commandant for Plans. External duties include military observer with the United Nations Truce Supervision Organization in Egypt, Deputy for Marine Corps Matters in the Secretary of the Navy's Office of Program Appraisal, and Executive/Military Assistant to the Director of Central Intelligence. In his last Washington Marine Corps assignment, he served as Director, Asian and Pacific Affairs, in the Office of the Undersecretary of Defense for Policy.

Professional military education assignments included the U.S. Army Infantry Officers Advanced Course, Marine Corps Command and Staff College, the Naval War College, and a tour as a Military Fellow with the Council on Foreign Relations. He is a distinguished graduate of the Infantry Officers Advanced Course and the Naval War College.

Civilian education includes a bachelor's degree from the U.S. Naval Academy, master's degrees in strategic planning from the Naval War College and international relations from Salve Regina College. He was awarded an Honorary Doctorate in Public Service by the University of Maryland.

Following retirement he joined the US Olympic Committee as Chief Operating Officer. In 2006 he formed his own consulting company.

He is a member of the Marine Corps Association, the U.S. Naval Institute, and the Council on Foreign Relations. He is a Trustee of the Marine Corps University Foundation, a Board Member for the US Naval Institute, and a former Director and Treasurer of the Injured Marine Semper Fi Fund. He is a past Honorary Adviser to the Okinawa Development International Council. He and his wife Cindy reside in Nokesville, VA.