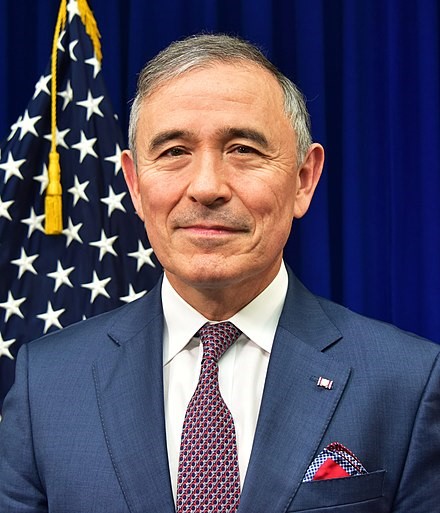 
Harry B. Harris, Ambassador of the United States of America to the Republic of Korea, was born in Japan and reared in Tennessee and Florida. Following graduation from the U.S. Naval Academy in 1978 and designation as a naval flight officer, he was assigned to VP-44. His subsequent operational tours include tactical action officer aboard USS Saratoga; operations officer in VP-4 at Barbers Point, HI; three tours with Patrol and Reconnaissance Wing 1 at Kami Seya, Japan; Director of Operations for U.S. 5th Fleet at Manama, Bahrain; and Director of Operations for U.S. Southern Command.

Harry’s staff assignments include aide to Commander, U.S. Naval Forces Japan; chief speechwriter for the Chairman of the JCS; and three tours on the Navy Staff, including as an action officer in the Strategic Concepts Branch, director for the current operations and anti-terrorism/force protection division, and Deputy CNO for Communication Networks (OPNAV N6).

In October 2011, he was assigned as the Assistant to the Chairman of the JCS where Harry served as the Chairman’s direct representative to the Secretary of State and as the U.S. roadmap monitor for the Mid-East Peace Process.

Harry has logged 4,400 flight hours, including more than 400 combat hours, in maritime patrol and reconnaissance aircraft. His personal decorations include the Defense Distinguished Service Medal, Distinguished Service Medal (2 awards), Defense Superior Service Medal (3 awards), Legion of Merit (3 awards), the Bronze Star (2 awards), the Air Medal (1 strike/flight), and the State Department’s Distinguished Honor Award. He is a recipient of the Navy League’s Stephen Decatur, the CIA’s Agency Seal Medal, the Ellis Island Medal of Honor, and APAICS Lifetime Achievement awards. He is the Navy’s current “Gray Owl” – the NFO who has held this designation for the longest period.

He was educated at Sarah Lawrence College and University College, University of London, UK.