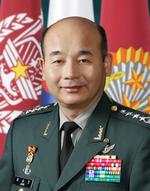 General Jung began his military career upon graduation and commission from the ROK Military Academy in 1976. During a distinguished military career that spans more than 30 years, General Jung has led ROK and ROK-U.S. forces in multiple command posts, such as ROK-U.S. Combined Forces Command Deputy Commander of the Ground Component Command; Commander of the 1st ROK Army; Commander of the 2nd Corps of the ROK Army; Commander of 1st Infantry Division of the ROK Army; and Chief of Operations of the 3rd ROK Army. Previously as Major General, General Jung was Director of Civil and Psychological Operations for the Joint Chiefs of Staff; Director of the Policy Planning Bureau for the Ministry of National Defense; and Commanding General of the Peace and Reconstruction Division (Zaytun) in the Multi-National Division-Northeast centered around Irbil, Iraq.

General Jung's awards and decorations include the Order of National Security Merit Tongil and Samil Medals, Order of Military Merit Chungmu Medal, and the U.S. Legion of Merit.

General Jung received his Master of Science degree in Management from the Graduate School of Yonsei University, and he attended the ROK Army Staff College and United States Army War College. While Lieutenant General, General Jung served as the Superintendent of the Korea Military Academy.