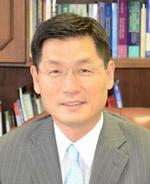 Mr. Gheewhan Kim began his post as the Consul General of the Republic of Korea in New York on April 7, 2015. Prior to his appointment, he served as the Minister for Economic Affairs at the Korean Embassy in Washington, DC from August 25, 2011 to April 2, 2015. His previous other duties include Director-General for Multilateral Trade in the Ministry of Foreign Affairs and Trade, dealing with WTO, APEC, OECD and G20 Trade matters. He was a senior official and a chief negotiator for various WTO Doha Development Agenda negotiations, including services and fishery subsidies. Mr. Kim was also involved in FTA matters as Deputy Director-General of the FTA Policy Bureau and was chief negotiator in the Korea-Japan FTA resumption talks.

As Head of Legal Service, Mr. Kim was responsible for WTO dispute settlement at the Ministry, where he successfully challenged countervailing measures imposed by Japan and the EU against Hynix DRAM semiconductors. He also served as Head of the Task Force for Hosting the 2012 Yeosu International Exposition.

Since joining the Ministry of Foreign Affairs in 1983, Mr. Kim has served at various overseas posts, including the Embassy in Muscat, Oman, and the Korean Mission in Geneva, Switzerland. He worked as Counselor at the Embassies in the United Kingdom and the Russian Federation. Mr. Kim served as Director for Supporting North Korean Refuges at the Ministry of National Unification. Also, he served as the Coordinator at the ASEM Vision Group Secretariat, which helped 26 Wise Men of Asia and Europe prepare a vision report on Asia-Europe relations in 1999. In 2008, he was awarded a Public Service Merit Medal. He completed military service as Lieutenant at the Judge Advocate General’s Office and at the Fleet Command of the Korean Navy.

He received his LL.B from the College of Law at Seoul National University in Korea, and graduated from the University of Cambridge in the United Kingdom with an LL.M and Diploma for International Law.

He is married with one daughter.