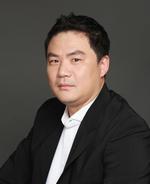 
A tenor, Joseph Kim earned a Master of Music Degree from the College-Conservatory of Music of the University of Cincinnati and Bachelor of Music Degree from the University of Maryland at College Park in Vocal Performance. Joseph has given numerous concerts within the United States and Europe. His operatic roles include Pélleas in Pélleas et Melisande with Thomas de Mallet Burgess and Flavio in Norma and Turandot with Nicolas Muni. Joseph has worked consistently with fine coaches such as Nico Castel, Stephen Crout, and Kenneth Griffith. He also received his Master of Art degree in Speech-Language Pathology (SLP) from University of Cincinnati. He is currently serving as a choir conductor at Korean Methodist Church of Greater Washington in McLean, Virginia and working as a Speech-Language Pathologist at the Virginian.