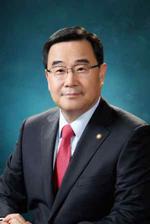 
Congressman Jung Hoon Kim, ICAS Fellow, is a three-term member of the National Assembly of South Korea, and just finished his term as the Chairman of the National Policy Committee of the current 19th National Assembly on June, 2014. As a key standing committee in charge of not only veterans’ affairs but also the economy, finance and economic democratization of Korea, the National Policy Committee oversees the Government Policy Coordination Office, Ministry of Patriots and Veterans’ Affairs, Financial Supervisory Commission and Fair Trade Commission. Jung Hoon was first elected in 2004 to represent Nam-gu District in Busan, and reelected for the same constituency at the 2008 and 2012 general elections.

In 2009, while serving as the Senior Deputy Floor Leader of the Grand National Party, Jung Hoon attended the 64th General Assembly of the United Nations where he appealed to UN Secretary General Ban Ki Moon about the importance of the world’s only United Nations Memorial Cemetery in Korea, which is located in Nam-gu, Busan. The following year, his commitment and dedication resulted in the United Nations designating Nam-gu as a Special Peace and Culture Zone for the United Nations, which is the only such zone in the world.

In 2010, as the Special Envoy of the former President Lee Myung Bak, Jung Hoon led the Korean delegation to Columbia, Paraguay and Brazil, which contributed to expanding the scope of Korea’s international cooperation in technology, resources and trade.

He also proposed a bill calling for designation of a day to commemorate the participation of the UN Forces in the Korean War. This bill, which has passed the Plenary Session of the National Assembly, is expected to provide an opportunity to pause and remember the noble sacrifices made by those UN member states who sent their troops to the Korean War as well as to further strengthen their ties with Korea.

He is currently the Chairman of US Korean War Veterans Support Foundation (US-KWVSF) to support US Korean War veterans and their families and descendants in various ways. The foundation had its starting ceremony at the Official Residence of US Ambassador to the Republic of Korea on January 23, 2014.

Rep Kim graduated LL.B. from Hanyang University in 1987 and received an Honorary Doctorate in Political Science from the Pukyong National University in 2013. Jung Hoon is now serving as a senior member of the ruling Saenuri (New Frontier) Party.