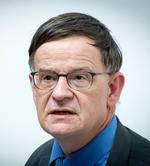 Andrei Lankov, ICAS Fellow, was born in Leningrad (now St Petersburg). He completed his undergraduate and graduate studies at Leningrad State University (PhD in 1989). In 1996-2004 Andrei taught Korean history at the Australian National University, and since 2004 he teaches at Kookmin University, Seoul (currently a professor at the College of Social Studies), and also director of Korearisk.com group.