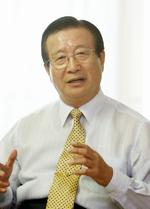 Dong-bok (DB) Lee, formerly a United Liberal Democratic (ULD) member of the National Assembly (1996-2000), is currently President, the North Korea Democratization Forum (NKDF), a non-governmental organization of South Korean activists devoted to the cause of democratizing North Korea. Mr. Lee was a Visiting Professor of the Myongji University, a private university in Seoul, Korea (2000- 2005), teaching both undergraduate and graduate classes on North Korean politics and inter-Korean Relations. Mr. Lee was a Senior Visiting Fellow at the Gaston Sigur Center for East Asian Studies. the George Washington University (September 1994-June 1995) and the Center for Strategic and International Studies (July 1995-January 1996), both located in Washington, D.C. Mr. Lee was also a Senior Research Fellow, the Research Institute for National Unification in Seoul (January 1994-May 1996). He retains his status as a Adjunct Fellow (Non-resident) of International Security Program at the CSIS.

Having studied political science at the Seoul National University, Mr. Lee began his career as a political reporter for The Hankook Ilbo (1958-1971), a mass-circulation Korean-language daily newspaper published in Seoul, Korea, followed by more than twenty years of playing a key role in the formulation and execution of South Korea's policy toward North Korea and national unification in his varying capacities such as Director-General for North-South Dialogue, the National Unification Board (1980-1982), Special Assistant to the Prime Minister (1991-1992) and Special Assistant to the Director, the National Security Planning Agency (1991-1993). Mr. Lee was one of South Korea's key negotiators in the inter- Korean talks in early 1970s and 1990s that produced a number of agreements that included, among others, the “North-South Joint Communique” of July 4, 1972, as well as the “North-South Agreement on Reconciliation, Non-aggression, Exchange and Cooperation” and the “North-South Joint Declaration on Denuclearization of the Korean Peninsula” of Feb. 19, 1992. Mr. Lee spent six years in the private sector as Executive Vice President and COO (1982-1988) of the Samsung Aerospace Industries Co., Ltd. and, concurrently, Co-president (1984- 1988) of the Samsung Medical Systems, a joint venture between the Samsung and the General Electric for the manufacture of low-end x-ray imaging equipment, and President (1985-1988) of the Samsung-United Aerospace, another joint venture between the Samsung and the United Techologies Pratt and Whitney Division for the marketing of Pratt and Whitney aircraft engines. Mr. Lee served, for two years (1988-1990), as Chief Secretary to the Speaker, the National Assembly.

Mr. Lee has authored three books, all in Korean, the first entitled Opening The Road To Unification (1976) the second You Cannot Conceal the Sky with the Palm of Your Hand (2007) and the third ROK-U.S. Security Alliance (2015) in addition to coauthoring Comprehensive History of Modern Koreas also in Korean (2007) while writing numerous articles and essays, both in Korean and English, on unification and inter-Korean relations, in addition to Political Culture of Memory in Divided Korea, a chapter in Remembering and Forgetting – The Legacy of War and Peace in East Asia, a significant issue series published by the CSIS in Washington in 1996.