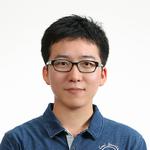 He served in the Republic of Korean (ROK) Army from July 2009 to May 2011 at the ROK-US Combined Forces Command, where J P translated documents and various seminars for the Korean and US military officers at the Civil- Military Operations Division. He also led the volunteers group in the unit and planned two combined English Camps in 2010. For his dedicated service, J P was awarded Army Commendation Medal from the US Army.

Since he first came to the States, he has been actively involved in journalism. J P wrote for The Daily Pennsylvanian, the student newspaper at the University of Pennsylvania, as a staff writer for four semesters at Penn.