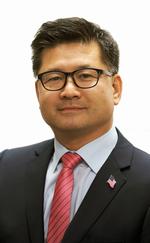 
Matthew K. Lee is a leading entrepreneur in the public and private sector. Matthew is Chief Executive Officer of FASTech Inc, an Engineering and Technical Services firm he founded in 1990. Under his leadership, FASTech has grown into a respected business serving government and commercial clients in the Baltimore-Washington corridor.

Matthew is committed to mentoring small businesses in the Federal marketplace and has served as the President of KoBE Government Contracting Alliance, a non-profit organization with a diversity partner’s network of more than 200 minority owned/operated business across the US. Recently, he served on Larry Hogan’s (Governor, State of Maryland) Governor's transition team and was appointed Secretary of TEDCO Board of Directors. TEDCO was established by the Maryland State Legislature in 1998 to facilitate the transfer and commercialization of technology from Maryland’s research universities and federal labs into the marketplace. Matthew is President of the Maryland International Development Center (MDIDC) for bilateral trade and investment globally.