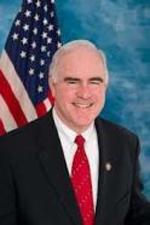 Patrick Meehan represents Pennsylvania’s 7th Congressional District in the United States Congress. Meehan "is avoiding the partisan fights that trap some of his DC colleagues and building a reputation as a pragmatic problem solver in SEPA," according to PoliticsPA.com.

Elected to Congress in 2010, Patrick has made economic growth in Southeastern Pennsylvania a top priority by supporting projects like the revitalization of the area’s refineries, the expansion of Philadelphia International Airport and the deepening of the Delaware River shipping channel – projects that mean jobs for the region. He’s fighting to reform our broken tax code, reduce our national debt, and rein in out-of-control Washington regulations.

In the 113th Congress, Patrick chaired the House Homeland Security Committee's Subcommittee on Cybersecurity. He focused on protecting America's critical infrastructure -- our transportation, energy, financial and communications systems -- from cyberattack. Patrick has worked with his colleagues on the committee to craft bipartisan cyber legislation that strengthens our government's response to cyberattacks, helps the private sector prevent intrusions, and protects the privacy and civil liberties of Americans.

Rep. Meehan is working tirelessly to root out wasteful federal spending and hold Washington accountable for poor management and misconduct. Patrick has taken his experience working with victims as a prosecutor with him to Congress, and has been a leader in the effort to protect the victims of brutal crimes such as sexual assault. He's teamed up with both Republicans and Democrats to combat sexual violence on college campuses and in the military. Patrick is fighting to provide vital support to victims through legislation like the Violence Against Women Act.

Prior to his election to the United States Congress, Meehan earned an impressive record as one of the Philadelphia area’s most respected prosecutors. Appointed by the President, Patrick served as the United States Attorney for the Eastern District of Pennsylvania, a position that made him the top federal prosecutor in a district that spanned nine counties with a population of over five million residents. During his tenure, the U.S. Attorney’s Office in Philadelphia became a national leader in prosecuting corrupt government officials. Patrick helped to put behind bars some of the biggest names in Philadelphia’s corrupt pay-to-play political culture, including former Philadelphia Treasurer Corey Kemp, Councilman Rick Mariano, and State Senator Vincent Fumo. He earned praise from both sides of the aisle for his integrity and his commitment to rooting out political corruption.
Prior to his appointment as United States Attorney, Patrick served as the District Attorney of Delaware County. As D.A., he successfully prosecuted several high-profile cases, including the murder trial of millionaire John DuPont and the trial of the murderer of local college student Aimee Willard. Patrick formed the Internet Crimes Against Children Task Force, a working group dedicated to protecting children from online predators.

A native of Cheltenham, Montgomery County, Patrick is a graduate of Bowdoin College and the Temple University School of Law. Prior to entering public service, Congressman Meehan spent two years as a referee in the National Hockey League. Patrick, his wife Carolyn, and their three sons live in Drexel Hill, Delaware County.