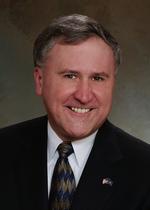 
Senator John C. Rafferty Jr. represents the residents of Pennsylvania's 44th Senatorial District, which includes parts of Berks, Chester and Montgomery counties. John was re-elected for a third term with the Senate in November of 2010. A former state deputy attorney general, the Montgomery County native has an extensive background in public service and local government. His top legislative priorities include reducing the property tax burden, protecting our environment, reducing health care costs, providing quality care for senior citizens, fighting prescription drug abuse and insuring that our police and firefighters have the resources they need to do their jobs. John serves as Chairman of the Senate Transportation Committee and is a member of Appropriations, Banking and Insurance, Consumer Protection and Professional Licensure, and Judiciary committees. Entering his third term in the Senate, he has achieved a long list of accomplishments and earned the respect of his colleagues, local government officials and community leaders. John has been successful in bringing millions of dollars of funding to move forward with revitalization projects in Pottstown and Coatesville, as well as many other projects around the 44th district. He has legislatively addressed the operations of landfills and brought local officials, community and business leaders together to seek common ground in improving our community's quality of life. John has also fought hard for the protection of our children with his sponsorship of Jessica's Law and support of improvements to Megan's Law. Additionally, he has opposed every possible tax increase considered in the General Assembly and continues to push the Legislature to address the burden of property taxes.

Senator Rafferty has received numerous accolades from various organizations in the 44th Senatorial District including 2005 Legislator of the Year Award for economic development from the TriCounty Area Chamber of Commerce in Pottstown, the 2006 Legislator of the Year Award from The Association of Retarded Citizens of Montgomery County, and the Taxpayer Hero Award from National Association of Independent Businesses. Additionally, the Pennsylvania Academy of Family Physicians honored John as the 2005 Friend of Family Medicine award recipient.

Prior to running for the Senate, John served as an attorney in private practice, focusing on education, real estate, zoning and business and estates law. As Deputy Attorney General for the Commonwealth from 1988 to 1991, he was responsible for the Criminal Law Division and Grand Jury Investigations. John has been active in local government, serving on various boards, authorities and commissions. As a member of the Lower Providence Township Board of Supervisors, he was involved with issues relating to growth and development, environmental protection and recreation improvements. John was a member of the Montgomery County Board of Assessment Appeals from 1996 to 2002. He also gained valuable knowledge of education issues as a member of the Methacton School Board from 1980 to 1984. From 1981 to 1984, he represented Methacton in the operation of the Vo-Tech School as a member of the North Montco Vo-Tech Joint School Authority.