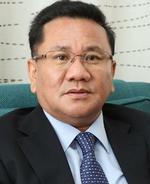 Jong Ho Ri is a former senior North Korean economic official. His last assignment was in Dalian, China as head of the Korea Daehung Trading Corporation, which is managed by Office 39, a clandestine organization under direct control of the ruling Kim family. Office 39 is responsible for procuring hard currency for the Kim regime, which is critical to sustain the economy and ensure the loyalty of party elites. Prior to his last posting, Jong Ho was President of Daehung Shipping Company and Director of Trade Management of Dae-Hung General Bureau of North Korean Worker's Party, a position equivalent to deputy secretary-level rank in the North Korean party-state. After that, he was Chairman of North Korea Kum-Kang Economic Development Group of North Korea Defense Committee, a position Jong Ho was directly appointed to by Jong Il Kim. Jong Ho is a recipient of the Hero of Labor Award, the highest civilian honor in North Korea. Following a series of brutal purges by Jong Un Kim, he defected with his family to South Korea in late 2014. Jong Ho currently resides in the greater Washington DC area.