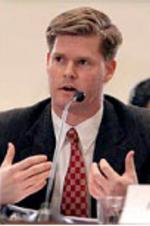 
Randall G. Schriver is one of five founding partners of Armitage International LLC, a consulting firm that specializes in international business development and strategies. Armitage International incorporated in March 2005. He is also CEO and President of the Project 2049 Institute, a non-profit research organization dedicated to the study of security trend lines in Asia. Randy is also a Senior Associate at the Center for Strategic and International Studies.

Immediately prior to his return to the private sector, he served as Deputy Assistant Secretary of State for East Asian and Pacific Affairs responsible for the PRC, Taiwan, Mongolia, Hong Kong, Australia, New Zealand, and the Pacific Islands. Prior to joining the Asia Bureau, Randy served for two years as Chief of Staff and Senior Policy Advisor to Deputy Secretary of State Richard Armitage. He joined the Department of State in March 2001 upon the swearing in of Deputy Secretary Armitage.

Prior to his work at the State Department, he served for four years in the Office of the Secretary of Defense (OSD) as a civil servant. As Senior Country Director for the PRC, Taiwan, and Mongolia in OSD from 1997 to 1998, Randy was the senior official responsible for the day-to-day management of U.S. bilateral relations with the People's Liberation Army, and the bilateral security & military relationships with Taiwan. Other OSD assignments included Assistant Country Director for the PRC, Taiwan, and Mongolia(1995-97), the Office of Counter Proliferation Policy (1995), and the Commission on Roles and Missions of the Armed Forces (1994). He joined OSD as a Presidential Management Fellow.

Prior to his civilian service, Randy served as an active duty Navy Intelligence Officer for nearly three years (1989-91). His operational assignments were with Patrol Squadron Four (VP-4), and Special Air Reconnaissance Squadron Three (VQ-3). During his stint with VP-4 Randy completed a deployment in theater for service in Operation Desert Shield/Desert Storm. After active duty, he served in the Navy Reserves for nine years (1991-2000). In his capacity as a reserve officer Randy completed active duty for training assignments as a Special Assistant to the Chairman of the Joint Chiefs of Staff (1999), and as an attaché at the U.S. Embassy Beijing (1997) and U.S. Embassy Ulaanbaatar (1996).

His political experience includes service as Foreign Policy Director for the Huntsman for President Campaign (2011-12), a foreign policy advisor on the McCain for President Campaign (2008), on the Bush-Cheney Defense Transition Team (2000-01), and work on the 2000 Bush-Cheney campaign as a member of the Asia Policy Team. Previously Randy served in both the Washington and district offices of Representative Denny Smith (R-OR) where he worked on defense and military issues (1987).

Randy has won numerous military and civilian awards from the U.S. government, and was presented with the Order of the Propitious Clouds by the President of Taiwan for service while at the State Department promoting U.S.-Taiwan relations.

He hails from the state of Oregon. Randy holds a master degree in public policy from Harvard University (1994), and received a B.A. in history from Williams College (1989). He was a four-year varsity college tennis player, and has completed four triathlons. Randy teaches a foreign policy course for Stanford University's Stanford-in-Washington program. He serves on the Board of Advisors of the Center for a New American Security, and the Board of Directors of the U.S.-Taiwan Business council. Randy is a lifetime member of the Veterans of Foreign Wars. He is married to the former Ms. Jordan Bredholt, and they have a son named Lucas, a daughter named Rory, a son named Brody, and a daughter named Meilani.