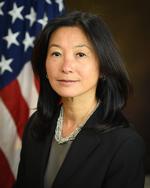 Sung Hee re-joined the Justice Department in September 2014 following 15 years at Schulte Roth & Zabel LLP, where she was a partner in the Litigation Group. Sung Hee previously served as an Assistant U.S. Attorney in the United States Attorney’s Office for the Eastern District of New York from 1994 to 1999, including as Deputy Chief of the Organized Crime and Racketeering Section.

She has received numerous awards and recognitions, including the New York City Bar Association’s Stimson Medal for Outstanding Contributions to the Office of the United States Attorney and the Women of Power and Influence Award from the National Organization for Women. Sung Hee also served for many years on the Boards of Directors of the Asian American Legal Defense and Education Fund and the Brennan Center for Justice at NYU School of Law.

Sung Hee was born in Seoul, Korea and immigrated to the United States with her family when she was six years old. She graduated Harvard College, Harvard Graduate School of Arts and Sciences, and Harvard Law School.