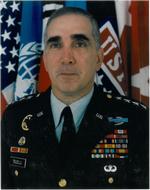 General Tilelli was raised in Holmdel, New Jersey. A 1963 graduate of Pennsylvania Military College, now Widener University, he received a degree in Economics and was commissioned as an Armor Officer. He attended the Armor Officer Basic and Advance Courses and Airborne School. He was awarded a Master’s Degree in Administration from Lehigh University in 1972 and graduated from the United States Army War College in 1983. General Tilelli is the recipient of an honorary doctorate in Business Management from Widener University in May 1996, and an honorary doctorate of law from the University of Maryland.

During General Tilelli's last active duty assignment as Commander-in-Chief of the United Nations Command, Republic of Korea/United States Combined Forces Command/United States Forces Korea, he commanded the largest standing joint and coalition force in the world comprising of over 650,000 soldiers, sailors, airmen and marines who led to the theater's campaign strategy and revitalized Korea's automated command and control and equipment modernization. During his tour in Korea, General Tilelli advised and made recommendations to foreign heads of state, Ministers of Defense and Foreign Affairs and United Nations leadership regarding national security, regional policy and planning.

Upon his retirement from the United States Army as Commander-in-Chief of the United Nations Command, Republic of Korea/United States Combined Forces/United States Forces Korea, General Tilelli was appointed as President and Chief Executive Officer of the USO Worldwide Operations. He had the responsibility for the operation of over 122 USO operations around the world in support of our servicemen and women and their families, raising the donor funds to allow continued support by the American people of over $20 million/year; building a $100 million endowment and managing and leading 600 employees and 12,000 volunteers. He did all this in close coordination with the senior leadership of the Department of Defense. General Tilelli also participated and led many senior panels related to defense issues since his retirement.

General Tilelli's military career includes serving as the Vice Chief of Staff of the Army and the Army's Deputy Chief of Operations during which he led the Army's vision to the Army of the 21st Century and implemented reforms in acquisition and procurement. His career included many command assignments including Commander of United States Army Forces Command where he improved readiness of all United States Army Forces (active and reserve) and was responsible for the Army's homeland security function. As the Commander, Seventh Army Training Command and Combat Maneuver Training Center, he revolutionized training in Europe. As Commander of the 1st Cavalry Division, Fort Hood, Texas, he trained, deployed and fought with the Division in Operation Desert Shield and Desert Storm.

General Tilelli's military career includes two tours in Vietnam and four tours in Germany. His combat tours include assignments as a Company Commander and District Senior Advisor in Vietnam and Commanding General of 1st Cavalry Division during Desert Shield and Desert Storm. In Germany, he served as a Troop Commander and S-1 in the 2d Squadron, 2d Armored Cavalry Regiment; Chief of Staff, 1st Armored Division in Ansbach; Regimental Commander, 2d Armored Cavalry Regiment in Nuremberg; and Chief of Staff, VII (U.S.) Corps in Stuttgart.