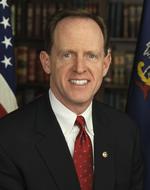 Pat was elected to the U.S. Senate from Pennsylvania on a platform of limited government, economic and job growth and job growth, and restoring fiscal responsibility. Since joining the Senate in January, he has distinguished himself as a leader on economic, financial services and budgetary issues, striving to restore fiscal discipline to Washington and economic opportunity for all Americans. Among other things, Pat has introduced a 10-year balanced budget proposal that received more votes in the Senate than any other budget plan this year, and he has successfully helped cut federal red tape for local communities and job creators in Pennsylvania.

Pat serves on the Budget; Banking; Commerce; and Joint Economic committees. He also is the ranking member on the Commerce Committee's Consumer Protection, Product Safety and Insurance Subcommittee. Pat previously served on the Joint Select Committee on Deficit Reduction.

Pat previously served in Congress as a member of the House of Representatives from Pennsylvania's 15th Congressional District, where he championed economic growth and fiscal discipline. In fulfillment of his three-term pledge, Pat retired from the House in 2004.

In addition to his public service, Pat has also served as president of the Club for Growth, owned and operated a small restaurant chain in the Lehigh Valley, and worked in the financial services industry.

A graduate of Harvard University, Pat lives in Zionsville with his wife, Kris, and their three children.