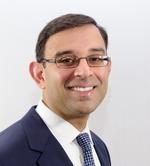 Atman Trivedi, ICAS Fellow, Managing Director, Hills & Company, has over 20 years of policy, legal, and communications experience across foreign affairs, trade, and national security with a deep understanding and set of relationships in the Indo-Pacific region.

He presently is a Managing Director at Hills & Company, International Consultants, advising companies on trade, investment, diplomacy, and politics primarily in Asia. Atman served as Senior Director for Policy in Global Markets at the U.S. Commerce Department. He played a leading role on India matters, including the creation of the U.S.-India Strategic and Commercial Dialogue and re-imagined U.S.-India CEO Forum, and managed the development of comprehensive strategic plans in key markets with a focus on Asia, including China. Earlier in President Obama’s Administration, Atman was Chief of Staff in the U.S. State Department’s International Security and Nonproliferation bureau. He was part of the diplomatic team that eliminated over 1,300 tons of chemical weapons declared by Syria, and addressed nonproliferation challenges posed by North Korea and Iran.

Atman worked on the Senate Foreign Relations Committee as Chairman John Kerry’s Counsel on India and Southeast Asia, and also advised him extensively on issues with China, Japan, and on the Korean Peninsula. Earlier, he served as Senator Kerry’s chief policy and legal adviser on defense, intelligence, nonproliferation, arms control, homeland security, and national security law.

Prior to government, Atman was an international trade lawyer at WilmerHale LLP. He counseled businesses on trade policy and litigation, economic sanctions, export controls, anti-bribery/FCPA, and CFIUS matters. Early in his career, Atman worked as a National Security Analyst at SAIC and a Junior Fellow at the Carnegie Endowment for International Peace.

He holds a B.A. in International Relations (minor in Economics) and M.A. in International Policy Studies from Stanford University, and studied abroad at Oxford University. Atman received his law degree from Columbia Law School, where he was a Senior Editor of the Columbia Law Review and shared the class prize for outstanding student in the study of international law. His commentary on North Korea policy and other global security and trade topics has appeared in many leading U.S. and Asian newspapers and magazines.

Atman completed term membership at the Council on Foreign Relations and is an adjunct fellow at the Pacific Forum; a member of the National Committee on U.S.-China Relations; the Pacific Council on International Policy; a fellow with the Truman National Security Project; and an Asia Society Asia 21 Fellow, where he was part of its inaugural India-Pakistan initiative. Atman understands spoken Gujarati and is proficient in Spanish.