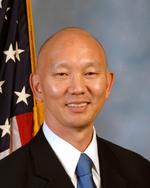 Edward You is a Supervisory Special Agent in the FBI’s Weapons of Mass Destruction Directorate, Biological Countermeasures Unit. Mr. You is responsible for creating programs and activities to coordinate and improve FBI and interagency efforts to identify, assess, and respond to biological threats or incidents. These efforts include expanding FBI outreach to the Life Sciences community to address biosecurity. Before being promoted to the Weapons of Mass Destruction Directorate, Mr. You was a member of the FBI Los Angeles Field Office Joint Terrorism Task Force and served on the FBI Hazardous Evidence Response Team.

Mr. You has also been directly involved in policy-making efforts with a focus on biosecurity. He is an active Working Group member of the National Security Council Interagency Policy Committee on Countering Biological Threats and an Ex Officio member of the NIH National Science Advisory Board for Biosecurity. He also serves on two National Academies committees, the Institute of Medicine’s Forum on Microbial Threats and the Committee on Science, Technology, and Law’s Forum on Synthetic Biology.

Mr. You also provides law enforcement biosecurity outreach by serving on the Strategic Advisory Board for the Synthetic Biology and Engineering Research Center and as an instructor for the United Nations Interregional Crime and Justice Research Institute.

Prior to joining the FBI, Mr. You worked for six years in graduate research focusing on retrovirology and human gene therapy at the University of Southern California, Keck School of Medicine. He subsequently worked for three years at the biotechnology firm AMGEN Inc. in cancer research.