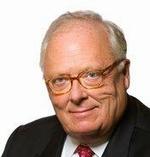 
Edwin J. Feulner, Jr., ICAS Liberty Award honoree, is the founder of The Heritage Foundation, Washington's leading public policy organization or think tank. On January 18, 1989 President Reagan conferred the Presidential Citizens Medal on him as "a leader of the conservative movement." The citation continues: "By building an organization dedicated to ideas and their consequences, he has helped to shape the policy of our Government. His has been a voice of reason and values in service to his country and the cause of freedom around the world."

Feulner also serves as President and Trustee of The Mont Pelerin Society; Trustee and former Chairman of the Board of The Intercollegiate Studies Institute; Director of Sequoia National Bank; member of the Board of Visitors of George Mason University; a Trustee of Regis University, St. James School, the Acton Institute, the Council for National Policy, and the International Republican Institute. He is past president of various organizations including The Philadelphia Society.

Feulner was the Vice Chairman of the National Economic Growth and Tax Reform Commission ("Kemp Commission," 1995-1996). He served as the Chairman of the U.S. Advisory Commission on Public Diplomacy (1982-91), as a Consultant for Domestic Policy to President Reagan, a consultant to White House Counselor Edwin Meese and as an advisor to other government departments and agencies. He was a member of the President's Commission on White House Fellows (1981-83), of the Secretary of State's UNESCO Review Observation Panel (1985-89), and of the Carlucci Commission on Foreign Aid (1983).

Dr. Feulner served as the Executive Director of the Republican Study Committee in the U.S. House of Representatives, the Confidential Assistant to Secretary of Defense Melvin R. Laird, Administrative Assistant to U.S. Congressman Philip M. Crane (R-Illinois), and as a Public Affairs Fellow at the Hoover Institution of Stanford University and the Center for Strategic and International Studies.

He is the author of several books: Conservatives Stalk The House (1983), and Looking Back (1981). He is also the author of a monograph entitled Congress and the New International Economic Order; editor of U.S. - Japan Mutual Security: The Next Twenty Years; China - The Turning Point, and a contributor to ten other books and numerous journals, reviews and magazines. He is the Publisher of Policy Review: The Journal of American Citizenship, and articles by him have appeared in Human Events, Chicago Tribune, New York Times, Los Angeles Times, Washington Post, Washington Times and other major newspapers. His monthly syndicated column has won several Freedom's Foundation Awards and appears in more than 500 newspapers.

In the summer of 1982, he served as a United States Representative to the United Nations Second Special Session on Disarmament where he delivered the final United States address to the General Assembly. During the transition from the Carter Administration to the Reagan Administration, Feulner served in several senior roles including the Executive Committee of the Presidential Transition. He remains involved in various aspects of foreign policy, particularly public diplomacy and international communications issues and international economic policy. He served on the United States delegations to several meetings of the IMF/World Bank group.

On a personal note, he is married to Linda Claire Leventhal. The Feulners have two adult children, Edwin J. III, and Emily. The Feulners live in Old Town, Alexandria, Virginia. Dr. Feulner is listed in standard reference works including the current edition of Who's Who in America.