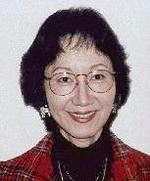 Chunghee Sarah Soh, ICAS Fellow, Professor of Anthropology, San Francisco State University, is a sociocultural anthropologist who specializes in issues of women, gender, sexuality, and social/cultural change. She performed a highly-acclaimed ethnographic study of virtually all of women who served in the national legislature of South Korea up to the early 1990s, which resulted in the books, The Chosen Women in Korean Politics: An Anthropological Study and Women in Korean Politics. She has also published extensively in scholarly journals on Psychological Anthropology, Women's and Gender Studies, Korean Studies, Asian Studies, and Asian American Studies. At present she is engaged in research on the Comfort Women, the women who were drafted in sexual slavery by the Japanese during the Second World War.

As a Korean-American who has lived, studied and lectured in many countries around the world including Japan, the Philippines, Jordan, the Netherlands, and the United Kingdom, Dr. Soh, in her current work, seeks to present a balanced study of the controversial issues surrounding the Comfort Women. Her research examines the historical realities of Japanese military prostitution and sexual slavery before and during World War Two in the context of violence against women, the patriarchal sexual culture and militarism. It also analyzes the evolution of the international redress movement for the Comfort Women survivors by feminist and human rights advocates in the context of the post-Cold War world politics of human rights. Field research for this project has been carried out in Korea, the National Archives in Washington D.C., Japan, and The Netherlands. Some of the findings of this research have been published in Asian Survey, Critical Asian Studies, Korea Forum, Korea Journal, Social Science Japan Journal, Peace Review, Women’s Studies International Forum, and The Historical Encyclopedia of World Slavery. The culmanition of this work was her award-winning 2008 book, The Comfort Women: Sexual Violence and Postcolonial Memory in Korea and Japan.

Dr. Soh served as Treasurer of the East Asia Section of the American Anthropological Association. She has served as a member of the Executive Committee of Women in Asian Studies of the Association for Asian Studies, a member of the Planning Committee of the Competing Modernities in Twentieth-Century Japan Conference Series II, and as an adjunct professor at the Intercultural Institute of California of the Korean Center in San Francisco.